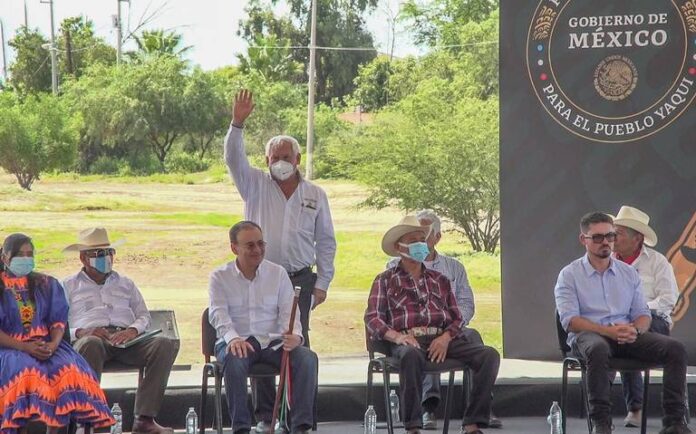 In the first stage, the “Strategic Project for Agricultural, Livestock, Aquaculture and Fisheries Development for Justice to the Yaqui People”, an amount of 115.3 million pesos will be allocated, in compliance with the instruction of the Chief Executive, reported the owner of Agriculture and Rural Development, Víctor Villalobos.

For agriculture, support for $ 52 million pesos is planned for 7 modules of agricultural machinery to serve more than 3,000 hectares, in addition, to support for the cost of wheat production and technical support with planners and designers.

An amount of $ 30 million pesos is for motors, boats, infrastructure, and equipment for aquaculture and fishing. In addition to the resource granted by the Bienpesca priority program, for the benefit of 579 producers.

From August to November, members of the Sociedad Cooperativa Pesquera from 5 municipalities of the Yaqui People will be benefitted.

And in the livestock subsector, the investment is $ 21.32 million pesos in direct support for livestock feeding; cattle herding actions; pasture recovery medical care, and technology packages.

In addition, other livestock projects are under development for the food self-sufficiency of the Yaquis Peoples.

The Secretary of Agriculture stated that 529 livestock production units were registered with at least 23 thousand 349 head of cattle among bovines, goats, and sheep as well as 430 hives.

According to a Report of Actions, in this first stage, 529 producers are supported with complete files, also validated by the traditional authorities and with 666 tons of food delivered.

He pointed out that 14 livestock technicians from the General Livestock Coordination, from August to December, will provide technical support for the management and conditioning of the cattle herd of the Yaqui peoples.

Vulnerable populations are also privileged by traditional authorities, who validate the lists of beneficiaries. 35% of those who receive the support are women.

The National Financial for Agricultural, Rural, Forestry, and Fisheries Development (FND) carries out financial inclusion and credit promotion actions as a complement to the technological package for planting wheat.

Besides, progress is being made in the review of the viability and reorganization of the credit bureau.

Finally, the Mexican Food Security Agency (Segalmex), through the strategic Guarantee Prices program, contributes to providing certainty in the commercialization and well-being of the wheat producers of the Yaqui towns.