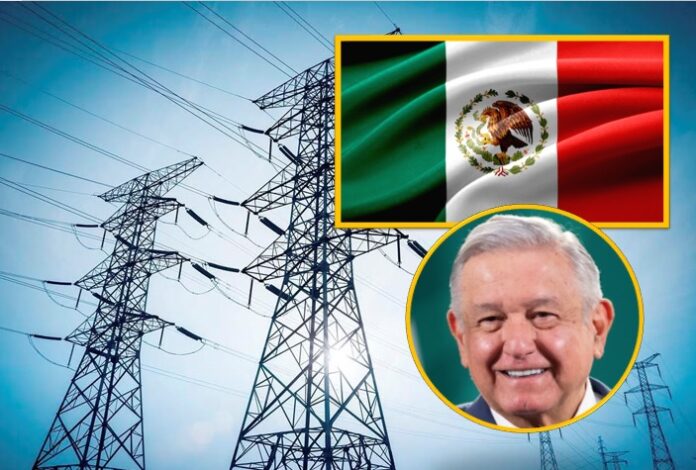 Adán Augusto López Hernández, Secretary of Government, announced the highlights of the initiative

Finally! President Andrés Manuel López Obrador reported this Friday that the electricity reform initiative has already been sent, which, among other issues, includes the issue of lithium exploitation.

“In that same initiative for the exploitation of lithium, only the nation will be able to do it. The lithium that is in the subsoil of our territory belongs to the Mexicans, ”said the president.

In the initiative of decree Articles 25, 27, and 28 of the Constitution are modified. With this, the CFE will now be a body with “its own legal personality.”

“It is about rescuing and strengthening the Federal Electricity Commission (CFE), guaranteeing through it the energy security of the country, in this case of the national electricity industry and that it is possible that there is electricity at a lower cost for Mexicans, that we can all have access to electricity and better prices ”, he said in the ‘morning’.

The CFE will be in charge of producing and dispatching 56 percent of the energy generated in the country, leaving the private sector to participate up to 46 percent.

In other words, the previous subsidiaries of the CFE will disappear, there remains a single body that will be in charge of the generation, distribution, and administration of the electrical energy that is produced.

According to López Hernández, the CFE will be strengthened through the disappearance of the contracts known as self–sufficiency.

“In reality, they were not associates in the production of electricity, but rather they were clients who benefited because these types of producers, among other things, did not pay postage or the cost of energy transmission was prorated for them,” he said.

In this sense, he explained that large commercial chains or self-service stores will have to acquire energy from CFE.

The minerals considered as strategic, including lithium, will not be concessioned, so it will be the State that will intervene in their exploration and production, the Segob head explained.

Likewise, he explained that the concessions that have been granted for the exploitation of other minerals, such as gold and silver, remain; however, these cannot be used for the production and exploitation of lithium.

“There are eight concessions granted to date for the possible exploitation of lithium and they will remain in force as long as they prove to CFE and the Ministry of Energy (Sener) that they have started the exploration process and that they are on the terms provided to start production. “, Held.

Given this, the official indicated that reports show that only one of those eight concessions comply with the guidelines.

“Two organizations that had been created to limit the functions of the CFE and benefit private producers, such as the National Hydrocarbons Commission CNH and the Energy Regulatory Commission CRE, also disappear,” said the federal official.

So with this reform initiative, they will become part of the Commission.

Mexico will respect Bacanora’s lithium concession, but will not give any more

The constitutional reform on the electricity industry may be the prelude to the creation of a new state company dedicated to the production of lithium.

The Mexican government wants to close the doors to private investment for the exploitation of lithium. This has been made clear in the draft constitutional reform on the electricity industry sent to Congress this Friday: it asks to consider lithium as “a strategic area of ​​the State”, a condition that oil and electricity already have. With this new status, the Mexican government seeks to exclusively exercise the right to exploit the deposits of this metal in the country, which is considered the new white gold. It is an increasingly valuable resource, as it is used to manufacture cell phone and car batteries.

If the electricity reform is approved, private investors will no longer be able to request concessions for the exploitation of lithium deposits in Mexico. “Concessions are no longer going to be handed out,” said President López Obrador in his morning conference. However, Bacanora, the only mine with operations that exists in the country and which is owned by the Chinese company Ganfeng Lithium, will not be expropriated.

In Mexico there are 36 lithium mining projects, all of them financed with foreign capital and controlled by 10 companies, according to data from the Comprehensive System on Mining Economy and the Ministry of Economy. Most are small Canadian companies looking to generate interest in the market and attract resources from investors. But there are really only three firms that are active in this sector and advancing in their projects: Bacanora Lithium, Organimax and One World Lithium.

In May, President Andrés Manuel López Obrador said that the Mexican state was considering “assuming a bigger role” in lithium production, arguing that companies were using mining concessions for speculation, rather than to extract the metal.

If the reform is successful, the companies that were granted a concession in previous years will have to demonstrate that they have effectively invested in exploration and exploitation. Although there are 36 projects in the country in the hands of 10 companies, “there are only eight (companies) that have declared that they have exploitation and want to invest in extracting lithium,” said López Obrador. One of them is Bacanora, owned by Chinese conglomerate Ganfeng Lithium.

The Bacanora lithium mine in Sonora

Bacanora Lithium owns three concessions in Sonora and has invested $ 50 million in feasibility studies and a pilot production. So far, it is the only successful lithium project in Mexico. “This is a real project, it is not speculation,” said a person with knowledge of the project at the beginning of the year, in an interview with Expansión.

The exploitation of the Sonora deposit was awarded to Bacanora Lithium a decade ago, during the government of Felipe Calderón.

In 2018, the company forecast production of 17,500 tonnes of lithium carbonate by 2020. The goal, however, was delayed and the company’s current estimate is that production will start in 2023 and increase to 35,000 tonnes annually. The company plans to invest up to $ 2 billion more in the next 10 years.

China’s Ganfeng Lithium, which this year took over the entire share capital of British company Bacanora Lithium, encompasses a broad extension of the lithium-ion battery supply chain, including lithium resource development, refining, and processing. (75% of its total revenues), battery manufacturing (17%) and battery recycling and others (8%), according to company data taken by the analysis firm Global X ETFs.

A new state company in sight?

The constitutional reform on the electricity industry may be the prelude to the creation of a new state company that is focused on the production of lithium and that, together with Pemex and CFE, allows the Mexican State to control all energy resources and infrastructure in the country.

But Mexico will have to seek allies within the private sector to develop a national industry around lithium. “The Mexican government is going to have to subcontract to third parties because it does not have the knowledge, the infrastructure, or the technology to exploit the (lithium) deposits,” says an expert in the sector who requested anonymity. “Lithium is not like oil, which is governed by international prices. Lithium prices are very volatile. More than half of the producers are losing a lot of money, ”he adds.

Bacanora, for example, entered into an agreement in 2020 with a Japanese commodity operator, Hanwa Corporation, to sell it a significant percentage of the production from the mine in Sonora at a fixed price.

In addition to the volatility of lithium in the markets, producers are challenged to find buyers. Ganfeng Lithium, for example, already has long-term supply contracts with major battery producers such as Panasonic and LG Chem, and also with assemblers such as Tesla, Volkswagen, and BMW. Thanks to these contracts, the Chinese giant has publicly said that it expects to double its capacity from 100,000 tons in 2020 to 200,000 by 2025.

“It is not only about the extraction of lithium, we are looking for how to design a comprehensive project for Mexico to successfully insert itself into a value chain,” said Tatiana Clouthier, Ministry of Economy, in May, after receiving advice from the Bolivian government on this metal. “If things go well, in a few months we will be laying the first stone for a company that would be installed for the production of batteries,” he added.

Specialists are skeptical about the Mexican government’s ability to build a successful marketing model around lithium. “Is not easy. Bolivia, which is a great model for Mexico, does not sell a ton of lithium. It is a good example of what happens when lithium is nationalized ”, concludes the specialist.

Amigo LNG plans to export gas from Sonora, Mexico to the US