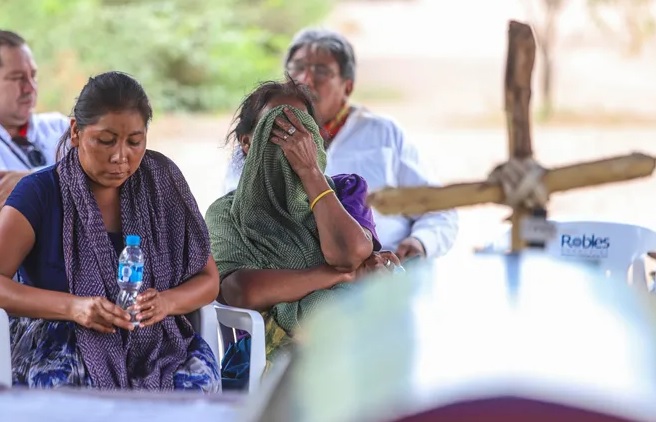 DNA tests on six sets of skeletal remains found in northern Mexico have confirmed that five of them belong to some of 10 missing men from Mexico’s most persecuted Indigenous group.

The prosecutor’s office in the northern state of Sonora said Monday the tests matched five Yaqui men who were abducted in mid-July.

The office did not suggest a motive in their deaths but said more bone fragments and possessions had been found in the rugged rural area, suggesting some of the still-missing men may also have died there.

The announcement came one day before President Andrés Manuel López Obrador is scheduled to attend a ceremony in the Yaqui community of Vicam, Sonora, to ask forgiveness of the Yaquis for a government campaign to exterminate or exile them around 1900.

López Obrador has made it a special project to bring justice to the Yaquis and Tuesday’s ceremony was meant in part to grant them better rights over ancestral resources like water and assure them the abuses of the past are over.

But the murders of Yaquis — including the killing of one of their leaders in May — suggest their suffering continues.

The Sonora state prosecutor’s office has suggested that the murder of Yaqui leader Tomás Rojo Valencia in May and the abduction and apparent killing of the 10 Yaquis in July were the work of drug cartels or allied local gangs.

There has been a huge increase in violence in the area around Vicam and the nearby city of Ciudad Obregon in the last year, something authorities say is due to turf battles between rival cartels.

But the area also has some of Mexico’s most productive farmland, where water — available largely from the Yaqui River — is a vital and precious commodity.

Some have compared the killings to the plot of the movie “Chinatown,” which revolved around an unexplained killing that actually involved the battle to control water rights around Los Angeles in the 1930s.

Alberto Vizcarra, a leader of the Sonora Citizen’s Movement for Water, said the fight over water may ultimately be behind the killings. “What they did to Tomás (Rojo Valencia) was a political crime,” Vizcarra said.

The six sets of skeletal remains were found near what prosecutors described as a gang hide-out.

Sonora state prosecutor Claudia Contreras said that investigators searching for the missing Yaquis came under automatic rifle fire on Sept. 19 on the remote hillside near where the skeletons were later found.

The investigators returned fire, killing two of the assailants. They then found what appeared to be an encampment of the kind often used by drug cartels, with guns, maps and tactical gear. The skeletons were found almost at surface level nearby.

Prosecutors cited similar claims about the killing of the Yaqui rights leader in May. They said a gang killed Rojo Valencia because it wanted money his Indigenous group had raised at highway blockades.

Rojo Valencia disappeared May 27 amid tensions over months of periodic blockades the Yaqui put up to protest gas ducts, water pipelines and railway lines that have been run across their territory without consulting them or giving them much benefit.

Prosecutors said Rojo Valencia had been trying to install a toll booth on the main highway that runs through Yaqui territory to raise money for his community.

The killings are likely to be a major embarrassment for López Obrador, who had invited U.S. President Joe Biden to attend Tuesday’s ceremony; some Yaquis live in the United States. Mexican authorities had said the U.S. is sending Secretary of State Antony Blinken instead, but it is not clear whether he will attend.

López Obrador has described the Yaquis as Mexico’s most persecuted Indigenous group and has started some programs for them. The Yaquis are perhaps best known abroad for the mystical and visionary powers ascribed to them by American writer Carlos Castaneda in the 1960s.

The Yaquis stubbornly fought the Mexican government’s brutal campaign to eliminate the tribe in the late 1800s and early 1900s. But they were largely defeated by 1900 and dictator Porfirio Diaz began moving them off their fertile farmland to less valuable territory or to virtual enslavement on haciendas as far away as the far eastern state of Yucatan.