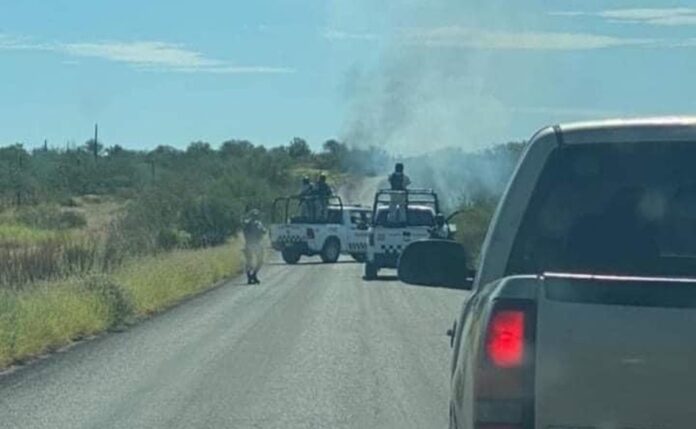 Although the preliminary official report indicates that only one man lost his life, journalistic reports collected at the scene of the events give an account of four deaths

Tubutama.- This morning, on the road section between Magdalena and Tubutama, there was an armed confrontation between criminal groups where at least four men were killed and two vehicles burned.

According to official data, the events were recorded around 10:20 am on Sunday, August 29.

Elements of the National Guard went to the place as the first respondent with the support of elements of the State Public Security Police.

They found a pick-up vehicle, of the Lobo line, cabin and a half, parked on the street from west to east with the pilot side door open.

On one side they found the lifeless body of a man, dressed in black.

About 200 meters away they located another SUV.

Both units were on fire and there were permitted bushings on the asphalt tape.

Although the preliminary official report indicates that only one man lost his life, journalistic reports collected at the scene of the events account for four deaths.

The preservation instinct of the minor, who could be three years old, saved him from being hit by bullets, while the adults fled from the hitmen

San Luis Río Colorado, Sonora.- In a video that circulates on social networks, a child,  who could be three years old, is fleeing from the hitmen who unloaded their weapons against several men.

The preservation instinct of the minor who was abandoned by the men who were attacked with firearms managed to get him to safety.

In the video, it can be seen that the people attacked are outside a home where a pick-up truck suddenly arrived.

Immediately, at least three subjects got out of the unit with firearms; The men ran and the boy who was close to them, in the middle of the shots, followed them to protect himself and fortunately was unharmed.

The report of the Municipal Police of San Luis Río Colorado indicates that these events took place at 5.30 p.m. on Saturday, August 28, at an address on Chiapas Avenue between 28 and 29 streets, in the Campestre neighborhood.

At the scene, police officers found three injured men, so they were transferred to a hospital to receive medical attention.

Violence has escalated in this municipality located in the northwest of the state, were on Thursday, August 26, two policemen were killed.

Officers José Marín Estrada Hernández and Griselda Barraza were ambushed by an armed commando on 42nd Street and Libertad Avenue.