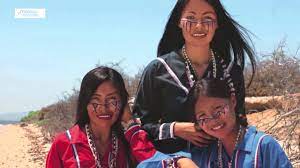 I met them recently, The Seris. They have copper skin, a stretched body. They are children of giants, they say. They are accompanied by the sea and Isla del Tiburon -in Sonora-, also their own legends.

There are several fantastic stories with which the men of the arena explain the world to themselves. Three of them with me stayed. The protagonist of the first is the sea turtle, the second talks about the origin of the stars, in the third the Seris were giants.

There was no, in the beginning, there was no land, only ocean, and sky. Under the waves, all kinds of animals moved that, dismayed by the lack of soil, decided to create a place with sand from the seabed where men could walk. Whales and sharks obtained only failures until it was the turn of the loggerhead. After submerging for an immeasurable period of time, the morose tortoise returned to the surface with a few elusive grains between its nails. The meager burden it brought with it was enough to shape the community’s purpose. Thus begins for the Comcáac people their time in the world.

Before the Spanish, upon their arrival in Sonora, the territory of this semi-nomadic ethnic group was vast. The ancient Comcáac moved from north to south between the Altar Desert and the Yaqui River; they had Horcasitas as their limit in the east; and to the west, in addition to the coastline facing the Sea of ​​Cortez, they occupied a few islands, including the extensive Isla del Tiburon. On that island, the largest in the Gulf of California, I came to camp one afternoon in early June. Nobody inhabits it anymore, but it still belongs to the Seris —the Yaquis call the Comcáac with that name, it means “men of the sand” -. Today the coast is their only home, the vastness has become small for them.

Divided into two communities, some live in Punta Chueca, 28 kilometers from Bahía de Kino; another 63 kilometers later, in El Desemboque. Together they have around 2,552 inhabitants. They are few. Those few still live as their ancestors did: from fishing and handicrafts. The men dedicate themselves to the sea, to seek sustenance among the waves —the ax callus that I tried with them—. The women, on the other hand, weave impossible baskets with a plant that is abundant in the region, the black torote; or they make necklaces with things that nature gives them and they renew: small shells and snails, black corals, seeds and flowers, rattlesnake or shark vertebrae.

It was the first time that I met the Comcáac when I appeared in Punta Chueca. The sun was not long in leaving. I had already gone to the Museo de los Seris in Bahía de Kino and talked there with Alejandrina Espinoza about their festivals, their centuries-old customs, their myths —she was the one who told me how the ethnic group explains the principle of the land. But journeys begin with the people, in their faces. Not before, not in the cédulas or in the books. Mine started when I met Duncan Lagarda and Patricia Barnett, my hosts, a couple who were going to cross with me to Shark Island so that I could explore it. He is from Hermosillo, she is Seri. Their skins are enough to know where they come from. We boarded, along with Miguel, another young man with a golden complexion ready to help us, in a motorboat.

If we had visited the community centuries ago, our means of transportation would have been another: a thin raft of reed and mesquite ropes that barely fit two souls. Wet, with oars and tiredness in tow, we would have docked at night on the island. The time of my visit gave me time. We managed to set up our camp with the sky still red above us. There was no need to sing songs along the way, those that were previously used to calm storms or calm tides. It got dark, we were ready.

The Cucapá have a myth similar to that of the Comcáac to clarify the creation of the earth’s surface: when there was only water in the world, it was the ants who were in charge of digging holes to drain the flooded – here you have to figure out the size of such holes—; thus the continents arose. As important are the diligent creatures for some, as the sea turtle for the others. The species that the Seris revere is the seven-edged loggerhead, black and immense. Every time the sacred animal appears on the beach, a rare thing, it is a heartfelt party.

We were talking about the turtle sitting in front of a bonfire. There was no one on the island, no one in the 1,208 square kilometers that surrounded us, other than us and the fire. On one side were the tents, beyond the sea and a turned off Punta Chueca. It was an open, serene solitude, which we fought with stories, Duncan’s guitar and stars. I’ve never seen a night like that. The entire celestial vault flickered. Some time later, another comcáac, Zara Monrroy, was going to tell me the second legend I remember. This time about the origin of some stars. I take his words back to that moment on Shark Island, because I can almost hear them there, between the glow of the campfire and the sky.

Once upon a time, there were three wrinkled-faced women, Zara told me, who met a young pregnant woman. They looked for a small ocotillo house to protect it and brought more people to take care of it.

But the mother-to-be’s grief forced the triad to go out in search of sage — the plant that has always protected and relieved the Seris. Far away, they turned to see the town they had formed, which they left behind: it was on fire. Sad the three grandmothers climbed to the top of a hill. The wind blew unrulily and as it dragged them, it turned them into stars. It is easy to recognize them, they shine in the constellation of Orion; their destiny was to become guides for fishermen and spirits. Every New Year – for the Comcáac it is July 1 – they are remembered since their mutation is part of the renewal of life, an idea that fascinates the men of the arena.

I slept then, without realizing it, under the shelter of these and other myriads of stars. I woke up to the vastness of the island. Duncan caught lunch for everyone. A snapper and a few curvinas. We were on the shore. We walked for hours inwards, with the sun in our eyes, in search of a hollow that Patricia wanted to show us and which I gave up before finding it. Gone was the wall formed by the roots of the mangroves on the coast. We went so deep that I came to think of the ocean as a distant thing. There were no shadows, only bushes of branches that dream of rivers and do not serve to scare away the heat. They serve other things. The Seris know it. They learned long ago to read the language of plants on the island, their island.

Cossahui is taken in tea to cleanse the kidneys, anemia is fought with the leaves of the brown branch, while the jojoba seed is good for the hair. Sage, adored as we already know, cures coughs and palpitations, but it is also imprisoned in cloth bags that, hanging around the neck, attract good luck. Animal figures used to be sculpted with ironwood, but the tradition – started by José Astorga in the 60s of the 20th century – was lost. Those that have not left, although now they are ornaments and no longer serve to accumulate water and food, are the baskets or coritas that the women weave with the fiber of the black bull. When someone finishes an oversized one, a limited event, since it takes years for the artisan, another traditional festival is celebrated.

The Comcáac do not sow, gather and hunt. They hunt mule deer. With the bones of their legs, they improvise needles that the basket weavers take advantage of. We did not bump into any of them and we were not going or would have wanted to go hunting; instead, they observed us hares and a white owl flapped its wings over us, in a hurry. In the mountains that we do not climb —because Shark Island is far from flat— they told me that bighorn sheep live. His eyes were fixed not on the distance but on the ground, where from time to time traces of footprints appeared, fleeting indications of animals that crossed the same path. There were tracks of coyotes, of already gone snakes, of tanagers and calenders that perhaps came down looking for fallen fruit.

The incandescence of the entire island gathered on my forehead. I asked to go back. First to the sea, the only place where the body could find peace, then to Punta Chueca. The island once again became a beautiful and inhospitable landscape, there, in the distance. On this side, the continent, the seris subsist under a very different order from that of nature. Their houses, ramshackle. Its patios of sand, adorned by mounds of garbage of all sizes. There is no pavement in the streets, but it is the least of it. Drinking water, drainage are missed. It’s hard to understand that everyday self-confidence. They live in harmony with their environment more in thought than in the immediate. His wealth is not material. It is their culture that maintains them. They were never evangelized, that is why their ideas about the earthly and the divine, their ancestral rites and alien to those of Christianity, amaze.

They were giants. They say that the Seris were giants. The land had already been formed, they inhabited the desert. Then their god urged them to ride and hunt: they could do neither one thing nor the other. They managed, yes, to fish. That newfound ability allowed the colossi to settle on the coast, to dominate the sea. Except that the place where they lived lacked hills and was frequently flooded. To protect them from the water, their god created mountains. They rushed to them the day there was a great flood. The lean Titans ran in vain, the flood reached them and they were transfigured into candles.

They sing at times all day, they sing songs in their language, but the old one. They know that part of their cosmogony hides in what is intoned. They also play, have fun with games that only they know. The women sit on a wheel made up of cut stones or biznagas and move, according to their rules, colored wands that come and go around the circumference.

The men in turn crowd around a sandbox and amuse themselves by guessing, as if it were a poker game, who is holding the reed with a straw inside. He looked at them, one after the other, under the huts that they build on occasions like this. This is how they lived before and now they remember it. Ribbons hang from the huts. The breeze moves three colors. Red White Blue. They wave the blood, good luck, the sea.