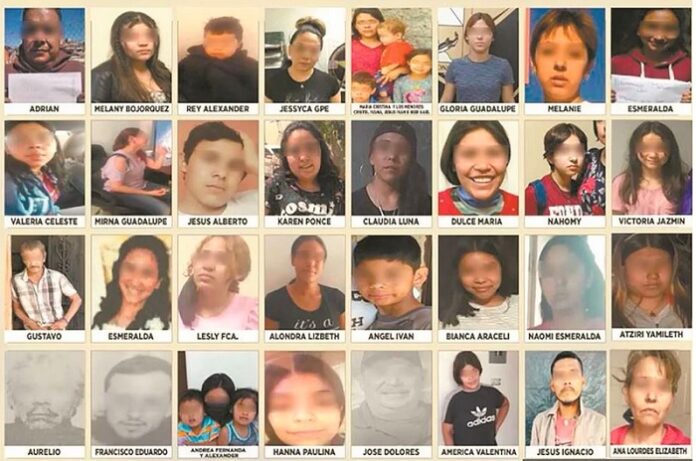 Sonora, Mexico.— The Sonora Attorney General’s Office reported that in the last 14 days 37 people with a missing person report were found safe and sound; he also announced that three more missing persons were found dead.

The findings were part of the joint work between state and federal authorities, coordinated by the Attorney General’s Office of the State of Sonora (FGJE).

In the search for people who had a missing report, agents of the Ministerial Criminal Investigation Agency (AMIC), municipal police, State Public Security Police (PESP), National Guard, Secretariat of the Navy (Semar), Secretariat of the National Defense (Sedena) and the Search Commission for Persons for the State of Sonora have participated.

In San Luis Río Colorado, they located Jessyca Guadalupe, 45, and two female minors, 14 and 15 years old, who returned to their respective homes.

Seven people were located in Nogales: six minors under the age of two years six months, one nine years old, one 13, two 14 and one 17 years old, as well as a 40-year-old person, identified as Adrián.

Mirna Guadalupe, 36, and a minor, 14, female, were found safe and sound in Guaymas.

On the other hand, in Bácum Magda Yaneth, 26, was located, and in Navojoa two minors, female, aged 15 and 17, were located, who were given shelter and were reunited with their respective families.

Regarding the three people who were found dead and who had a missing report, it was detailed that their names were Cindy Priscila, 27 years old, in Hermosillo; Julio, 25, in San Luis Río Colorado, and Andrea Carolina Osuna, 37, in Guaymas, whose murderer is already in preventive prison for the crime of femicide.