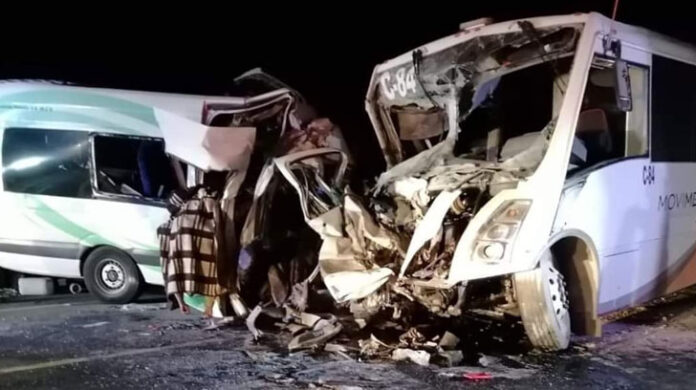 CABORCA, SONORA.- 16 people dead and 20 injured is the balance left by a collision of a passenger bus with a tourist van on the Caborca-Sonoyta highway, that occurred on Tuesday, April 6th.

The accident between a bus carrying mine workers and a tourist van occurred at approximately 03:30 am this Tuesday at km 156 in front of the mine.

It is in the van type truck where the 13 lifeless people are reported, which was circulating on the international highway.

While the injured people are personnel who work for the mining company and are already transferred to receive medical attention at various health centers.

The State Attorney General’s Office (FGJE) reported through a statement that so far three of the deceased persons have not been identified. Two personnel transport vehicles from the same mine participated, a Movimex company bus, economic number C84, with 14 injured people, including the driver, all transferred to receive medical attention at hospitals in Caborca.

The other unit is a Transportes Ejecutivos Premier (TEPSA) wagon that transported 16 people, of different sexes, all of whom lost their lives inside the vehicle. Personnel of Expert Services of an FGJE Sonora is conducting the corresponding investigation.

Officials from the National Guard Highway Division attended as the first responding authority.

5 Red Cross ambulances arrived on the scene to transfer the injured to a safe place.