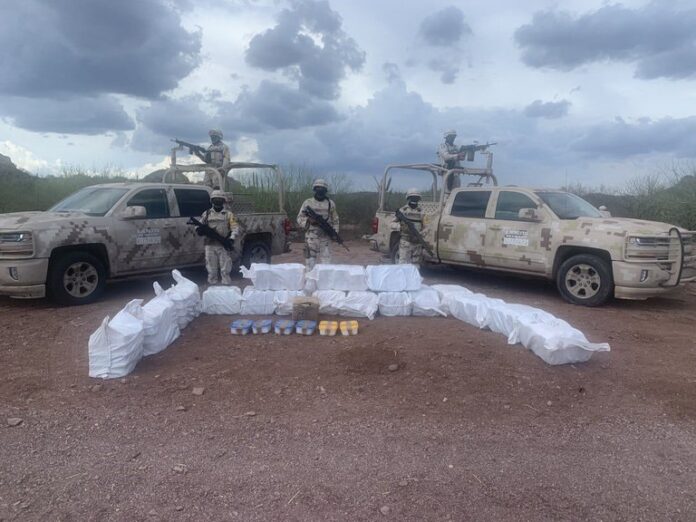 On Monday, July 5, Army and Air Force personnel seized half a ton of methamphetamine and 14 kilograms of suspected fentanyl in Cajeme, Sonora.

“To attend to the interception of the illicit aircraft, airborne troops moved to the place of the probable landing in Cajeme, aboard a helicopter of the Mexican Air Force, as a reaction force,” reported Sedena in a statement.

Upon realizing that it was being followed by aircraft of the Armed Forces, the aircraft descended on a dirt road that had been enabled as a landing strip. According to Sedena, at that moment the crew abandoned the load and took off again with an unknown destination to avoid being stopped. In a few minutes, the Mexican Army and Air Force arrived to secure the abandoned packages.

At the site, 17 white sacks and 214 plastic containers that apparently contained methamphetamine were found. The total stimulant drug was estimated to weigh approximately 550.70 kilograms. Eight wrappers and four other plastic containers with fentanyl, the deadly synthetic opioid that has the United States on edge, were also found, totaling approximately 14.14 kilograms in weight.

The authorities estimated the value of the drug in the market at more than 270 million pesos (around 13 million USD).

“We are afraid”: Magdalena de Kino, from magical town to ghost town