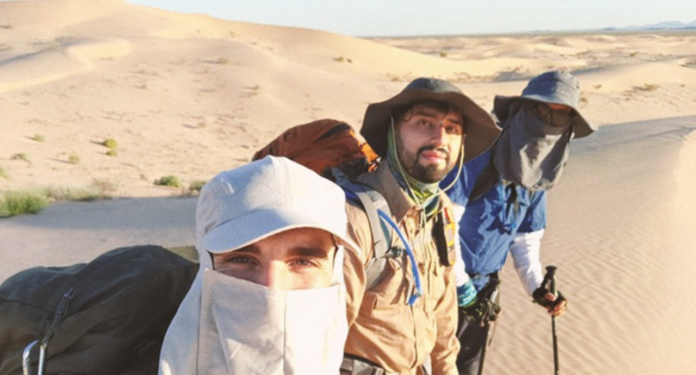 Omar, Osamu and Michael traveled more than 130 kilometers through the Gran Desierto de Altar in Sonora, reflecting on migration and self-knowledge

In six days, three friends covered a total of 136.5 kilometers in order to cross the Great Altar Desert. They are Michael Bach, Luis Omar Calva and Osamu Uehara from Hermosillo, Sonora. From March 29 to April 4, they walked more than 30 kilometers a day to make this project a reality.

What was the most difficult? How did you prepare physically and mentally for this? Where did the idea come from? How did your way of seeing life change after the crossing?

They met at the Sonora Adventure and Exploration Club – a group where nature lovers meet. There they agreed that they wanted to tour the Great Altar Desert.

“Between Michael and I began to organize ourselves and extend the invitation to the people of the club to see dates, logistics, preparation, and training, it is not something that arose from one day to the next,” said Luis Omar Calva, 31 years old.

It was four months of training; They progressively increased both the mileage and the weight of their backpacks, until they were able to carry approximately 10 kilograms, Osamu explained.

We had for example a long session of 60 kilometers in a weekend, we could not extend the training any longer because we would go further into the summer.”

Michael Bach has lived in Hermosillo for three years, but he is from Germany. It was on March 28 when they reached San Luis Río Colorado and on the 29th they began the walk towards Puerto Peñasco.

“In our case, the weather was difficult, we knew it was going to be hot, but we had a week with a heat front, a higher thermal sensation than we previously calculated and that led us to a greater consumption of water and a change on the road, ”said Michael, 31.

Each one brought a tent, a sleeping bag, six liters of water, food, a first aid kit and a survival kit, batteries, GPS, tarps and special objects that would give them strength.

For Luis Omar Calvo – sixth grade teacher – the letters that his students from Palo Alto School wrote to him managed to be an impulse. “Every day I read some to motivate myself,” he shared.

Blisters, chafing and kilometers of more

The three agree that the most complicated day of the route was the second, because there they realized how difficult the journey was and that the desert must be respected:

“The heat. We had to make a lot of plan adjustments, decrease water consumption in a rump way, walk at night which was something we hadn’t done in the original plan, ”said Osamu Uehara.

“The hardest thing was on the second day. We must have walked 35 kilometers but it was forty-something, avoiding dunes, said Michael Bach, who usually spends most of his day sitting down as he is a teacher at Tecnológico de Monterrey.

“On the second day the blisters on the feet, the rubbing on the heel, the toenails, I struggled when walking and that was when the heat appeared more, my feet were very bad,” Luis Omar Calva also said.

On the third day they had to continue making adaptations, as the heat continued to increase. “We had many detours, we walked more than planned, we saw dunes of all kinds, colors and heights,” added Osamu Uehara.

As time went by, the changes were not only in the route but also in the mentality of each of the friends, because sleeping in the dunes they had many hours to reflect on the matter.

“When one is in the Altar Desert, one realizes how small we are, like an insect, the desert puts you in your place and when the water runs low it is when it comes to surviving; the things we complain about every day are ridiculous, ”said Michael Bach.

Luis Omar Calva reflected on migration in the walk of more than 100 kilometers: “People who cross without all these luxuries that we have, each step we took was to think how they can walk so much, we have to be empathetic.”

“So many hours alone with yourself, with your thoughts, it is therapeutic, beyond the physical challenge, fulfilling something of this magnitude gives you a boost in self-esteem, you begin to rethink that you can achieve many things in life,” said Osamu Uehara.

Finally, on day six they completed 136.5 kilometers when they reached the goal: the Pozo Nuevo ranch of the Barba family located on the highway that goes from Sonoyta to San Luis Río Colorado. Their team was waiting for them, there was unlimited food and a good bath.

“The mere fact of opening the tap and seeing the water surprises you after spending days rationing every milliliter, Osamu Uehara considered.

The three friends do not contemplate putting an end to this type of adventure, but planning new challenges:

“What I need most is walking in the forest, after so many dunes, I need to see forests, said Michael, who is originally from Marl, a small town in Germany, so small that he thinks that” not even in Germany they know it.

As a final reflection, Luis Omar spoke about garbage. “It is something that disappointed me, finding for example a balloon, there is a trace of us humans in the most remote places,” said the sixth-grade teacher.

What if someone wants to do the tour?

The general message of the three for people who are interested in doing tours of this type is to do so, as long as they are physically prepared for the journey and have communication with the authorities.

“The Gran Desierto de Altar is part of the El Pinacate Reserve and we were not going to get involved just like that, from the beginning we were in contact with the director to get it approved, also with the people of the Pozo nuevo ranch because without their monitoring we would not we would have succeeded ”, assured Luis Omar Calva.

To people who think that doing this kind of thing “is crazy”, Michael Bach tells them that anything is possible, as long as it is in a responsible way.

“The desert puts you in your place and if you underestimate it it is very dangerous, without fear but with a lot of respect,” concluded the young German.