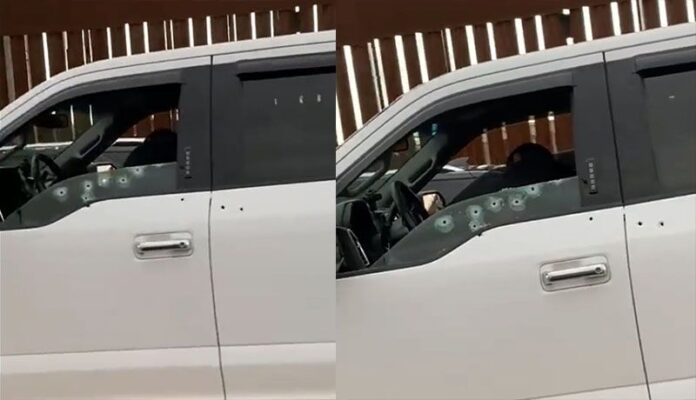 SAN LUIS RÍO COLORADO.- A man was shot to death when he was in his vehicle at the crossing from San Luis Río Colorado to the United States, according to the State Attorney General’s Office through social networks.

“A direct attack is being investigated, with firearm projectiles, which deprived the life of an adult male, who was traveling on board his vehicle at the crossing from San Luis Río Colorado to the United States,” the message states.

According to the agency, the assailants were traveling in a black pick-up, from where they detonated when the victim was in line to cross the border, in the Commercial neighborhood.

The male was traveling aboard a white Ford F150 vehicle with Arizona license plates, on international avenue and 2nd street in San Luis Río Colorado, Sonora

“No line of investigation is ruled out,” says the State Prosecutor’s Office, an agency that did not identify the victim.

In another shooting man shot on road to SLRC; dies in hospital

The aggression with dozens of shots occurred near the Miguel Alemán neighborhood, in the Mexicali valley.

A man was attacked by subjects armed with rifles this Thursday afternoon on the highway to San Luis Río Colorado, at the height of the Miguel Alemán neighborhood, in the Mexicali valley.

His truck was left on the highway with dozens of bullet wounds, and the victim was helped by other motorists, although he finally succumbed to his injuries at the hospital.

The events occurred this Thursday at 4:34 p.m. in the aforementioned location, near the bridge of said neighborhood, where municipal agents found the abandoned truck.

The gold Toyota Tacoma vehicle, model 2002, with Sonora license plates, was abandoned after colliding with its side against the side wall of the bridge.

Dozens of bullet wounds were found in it, as well as blood stains on the driver’s seat.

Near the scene, approximately 35 shell casings were found, apparently from .223 caliber long weapons.

Elements of the Municipal Police of Mexicali and San Luis Río Colorado arrived at the scene, as well as the Mexican Army and the Baja California State Attorney General’s Office.

It was reported that the motorist, identified as Francisco López Sánchez, 33, had managed to call for help on the Colorado River bridge.

The man was admitted to a San Luisino hospital, where hours later he was declared deceased after succumbing to injuries.

Based on these events, a collaborative effort was initiated between the prosecutor’s offices of both states to clarify the homicide.