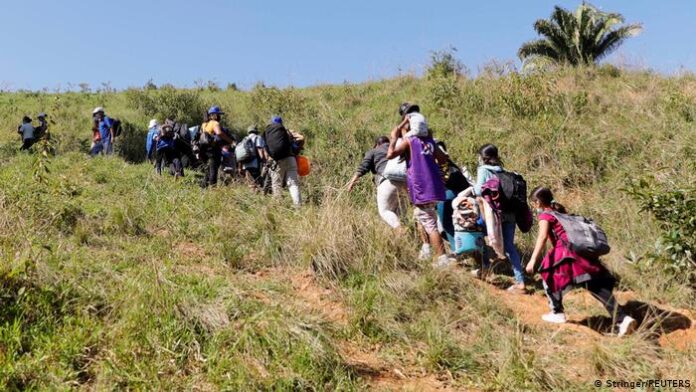 NOGALES, SONORA.- As hundreds of migrants line up along an Arizona border wall around 4 a.m., agents try to separate them into groups by nationality.

“Anyone from Russia or Bangladesh? I need somebody else from Russia here,” an agent shouts and then says quietly, almost to himself, “These are Romanian.”

It’s a routine task for the Border Patrol in the wee hours in this flat expanse of desert where the wall ends. Migrants from at least 115 countries have been stopped here in the last year, but that may be less striking than what’s missing: Mexicans are virtually absent.

Instead, families from Venezuela, Colombia, Haiti, Cuba, Brazil, India, and dozens of other countries arrive in Yuma after wading through the knee-deep Colorado River. Their presence reflects how a pandemic-era rule still shapes the journeys of many migrants, even though much of the U.S. has moved on from COVID-19.

The changing demographics mark a dramatic shift away from the recent past, when migrants were predominantly from Mexico and Central America’s Northern Triangle countries — Guatemala, Honduras, and El Salvador. That’s especially clear at some of the busiest crossings, like Yuma and Eagle Pass, Texas, near where several people died in recent days while trying to cross the Rio Grande.

Mexicans still cross elsewhere but often try to elude capture because they are likely to be expelled under a pandemic rule that denies them a chance to seek asylum.

Mexicans still account for 7 of every 10 encounters in the Border Patrol’s Tucson, Arizona, sector, where smugglers order them to walk at night with black-painted water jugs, camouflage backpacks, and boots with carpeted soles to avoid leaving tracks in the sand, said John Modlin, the sector chief.

“Incredibly different tale of two borders, even though they’re within the same state,” Modlin said.

Migrants who are not from Mexico and the Northern Triangle accounted for 41% of stops on the border from October through July, up from only 12% three years earlier, according to government data.