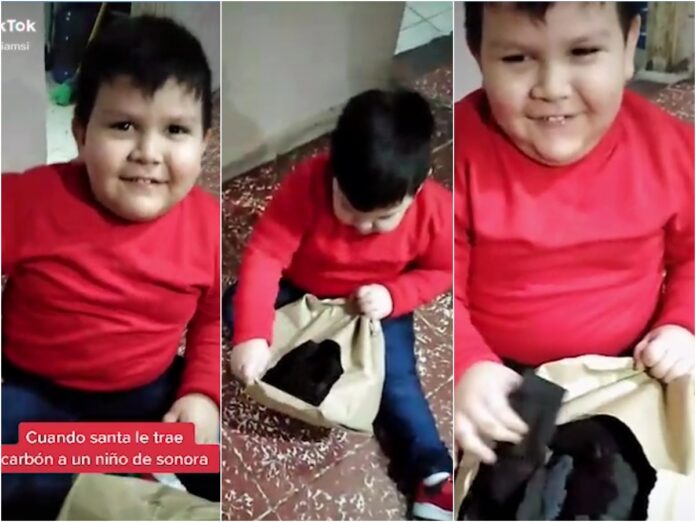 One of the greatest traditions around Christmas time is gifts, many of which come from ‘Santa Claus’; However, there is a belief that children who misbehave will only receive coal as a gift, and this happened to a boy from Sonora, who conquered TikTok for his unexpected reaction to unwrapping his surprise.

And to everyone’s surprise, the little one was satisfied with his gift and even had an idea about how he would use it.

Instead of some tantrum, the boy reacted in a way few expected.

A user identified as Itsmariamsi, shared this video on TikTok, which already accumulated thousands of likes and which moved social networks throughout Mexico. As part of a joke, a boy was given a bag full of charcoal as a Christmas present, thinking that he would have a sad or tantrum reaction, however, it was the opposite.

When he opened the bag and realized it was charcoal, the boy – although he was out of the loop – said: “The good thing is that Santa brought me this, right? To cook carne asada. I thought they were cars”.

The reaction prompted dozens of comments in which, far from criticizing the joke made by the adults on this little boy, the humility with which he received it was highlighted, always taking the positive out of a situation that could seem uncomfortable to us.

That was not the boy’s gift

Although many were concerned that the child had really received this gift from Santa Claus, the child’s mother uploaded another video where the child is now seen enjoying his real gifts, which were toys, in addition to the coal which they will use for a great BBQ.

“Literally, this child does deserve a great gift”; “How beautiful, see the positive side”; “I loved him, but I loved more the great work that dads have done”; were some of the comments received in this video that undoubtedly leaves us a great reflection in this Christmas season.