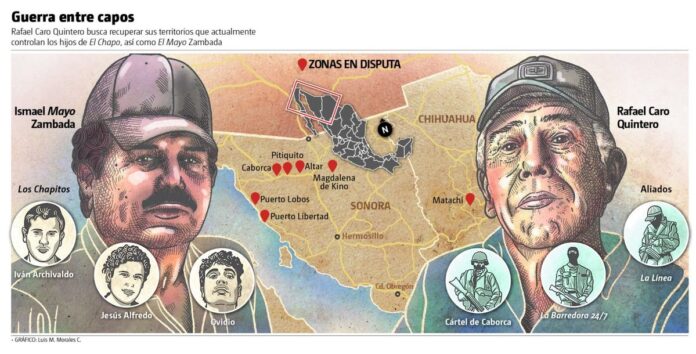 The war between the Caborca ​​and Sinaloa cartels unleashes an inferno in northeastern Sonora. The people of the coast, according to intelligence reports, are not just local groups.

Rafael Caro Quintero is back and has become more violent. His public return to Mexican organized crime occurred on Monday, May 18, 2020. That day, on the highway to Caborca, Sonora, two dismembered bodies appeared with a message that clarified the situation:

“The people of the coast are informed that we are people from Caro Quintero, this square belonged to us and now all those producers, merchants, and miners in the region will have to pay a FEE.”

The people of the coast, according to intelligence reports, are not only local groups like the Paleteros, who are losing their territories in southern Sonora. The people of the coast are also the lieutenants of Ismael El Mayo Zambada and the sons of El Chapo Guzmán. Caro Quintero’s people are the thugs of La Línea (former Juarez cartel) and the Jalisco Nueva Generación Cartel. And this war has caused homicides in Sonora to have increased by 20 percent this year alone and the Sonora Criminal Traffic Light places Caborca ​​in red since it is located in the top five of the municipalities with the highest number of intentional homicides.

According to the Executive Secretariat of the National Public Security System, in 2018 there were 25 intentional homicides in Caborca; a year later, the incidence rose to 32; in 2020 it shot up to 127. The upward trend continues: as of September of this year there are 92 murders.

It all started in August 2013, when a collegiate court ordered the release of Caro Quintero. The allegation was that Enrique Camarena, the DEA agent, allegedly assassinated by Caro Quintero in Guadalajara in February 1985, was never assigned to the US foreign service. Therefore, Caro Quintero had to be tried by the common jurisdiction and, from the court’s perspective, he had already served the prescribed penalty: 28 years.

Once free, according to the intelligence reports consulted, Caro Quintero moved to the municipality of Matachí, in Chihuahua, where his last wife, Diana Espinoza Aguilar, was waiting for him. Through his associates, he made it known to the government and the bosses that he was not interested in returning to illicit businesses. The message was of little interest to the former Attorney General’s Office and appealed the decision to have Caro Quintero released. On Friday, January 16, 2015, the PGR managed to issue a new arrest warrant against him.

Forced to leave Matachí, El Mayo offered Caro Quintero refuge in Surutato, north of Badiraguato, Sinaloa. He did not last long there because the government followed his footsteps and the old capo had to escape. He arrived at El Batamote, in Sonora. There he was hosted by Jesús González Pañuelas, related to the family of El Chapo Guzmán. As in Surutato, the hunt by the authorities forced him to flee.

Both intelligence reports and those close to Caro Quintero say that threatened by the possibility of spending his last years in prison, the capo chose to resume his old tricks. And that, to recover the territories that were his for more than 40 years, territories such as Caborca, Pitiquito, Altar, Puerto Lobos, and Puerto Libertad, Caro Quintero convened, in 2017, a meeting with his subordinates, including his nephews Juan Pablo and Said Emilio Quintero Navidad (already in prison). The point to be discussed: to launch the plan to regain command in Sonora, based on something called “The Caborca ​​cartel.”

Among the first actions of this incipient group was to create the armed wing La Barredora 24/7 and establish an alliance with La Línea, through Jesús Salas Aguayo, El Chuyín, who stands out on the DEA’s most-wanted list. Why didn’t he ally himself with El Mayo and the sons of El Chapo? Intelligence reports say that Caro Quintero believes she has the right to seniority.

The Caro Quintero- “El Mayo” / “Hijos del Chapo” war has unleashed hell in northeastern Sonora, especially in Caborca ​​and Magdalena de Kino. In recent weeks, for example, it has become customary for corpses to appear just at dawn and on the road. Intelligence reports mention that, late in the afternoon, the drug traffickers take over the patrolling of the streets. “Armed civilians, dressed in military clothing and bulletproof vest, patrol in armored vans.”

The return of Caro Quintero to organized crime does not only mean waging a war against El Mayo and the so-called “Chapitos.” It also means, among other actions, cleaning up the inside of his cartel, the Caborca ​​cartel. What happened at midnight on June 19 last year.

That midnight, thugs from La Barredora 24/7 stormed the rural area of ​​Caborca, controlled by Los Paleteros, a group that worked for Caro Quintero. Those of the 24/7 Sweeper were climbing on a dozen trucks that, to identify themselves, had the X marked with white tape on the doors. The hitmen shot and set fire to houses, vehicles, and even gas stations. There were 12 dead.

That same Friday, June 19, a confrontation was recorded on the coast of Caborca, where Los Paleteros also dominate. Several residents of the town were attacked and kidnapped. As the alleged perpetrator, El Cara de Chochi was pointed out.

Twenty-four hours later, on Saturday the 20th, a second shootout occurred on the Caborca-Sonoyta highway. The balance: 13 dead. On Sunday 21, a refrigerated trailer was abandoned in Caborca, in which 16 bodies were found. On Friday the 26th, another trailer appeared, now on a car lot. There were four more bodies there. The Caborca ​​cartel is held responsible for all these events.

The attack on the LeBarón

The Caborca ​​cartel is also blamed for the homicides of six minors and three women from the LeBarón family, in November 2019, in the municipality of Bavispe, Sonora. Adrián LeBarón, father and grandfather of the victims, has assured that Caro Quintero was behind those murders.

Two of the alleged murderers, who were later detained —Rodolfo González Montes, alias El 32 and Fredy Calles Romero—, have been identified as subordinates of Jesús Salas Aguayo, El Chuyín, and therefore as members of the criminal group La Línea, which today works with Caro Quintero. The motive behind the attack on the LeBarón family would have been a concerted action by the Caro Quintero-La Línea alliance to appropriate a large area of ​​land, rich in lithium, currently in the possession of the LeBarón family.

One of the most recent events, attributed to the Caborca ​​cartel, occurred on Thursday, May 13, 2021: That day Abel Murrieta Gutiérrez, candidate for municipal president of Cajeme by Movimiento Ciudadano, was assassinated. Coincidentally, Murrieta was the legal advisor to the LeBarón family in their complaint against Caro Quintero.

This violence affects all of Sonora: the latest report from the secretariat details that during the first nine months of 2021, intentional homicides increased 23.4 percent compared to the same period last year, while femicides doubled. The trend regarding the crime of extortion is also striking: it went from 36 cases in 2020 to 62 complaints so far this year.

The municipal authorities themselves have asked the state and federal government for help to contain this wave of violence caused by Caro Quintero and his rivals.

“Citizens claim us, with all rights, the security that corresponds to them and, which they feel, has been taken away from them,” wrote the mayors of Caborca ​​and Pitiquito in a letter sent to President Andrés Manuel López Obrador and then-Governor Claudia Pavlovich.

As surprising as this story may seem, at 66, Caro Quintero is back and the aforementioned Caborca ​​cartel has become a serious threat to peace.