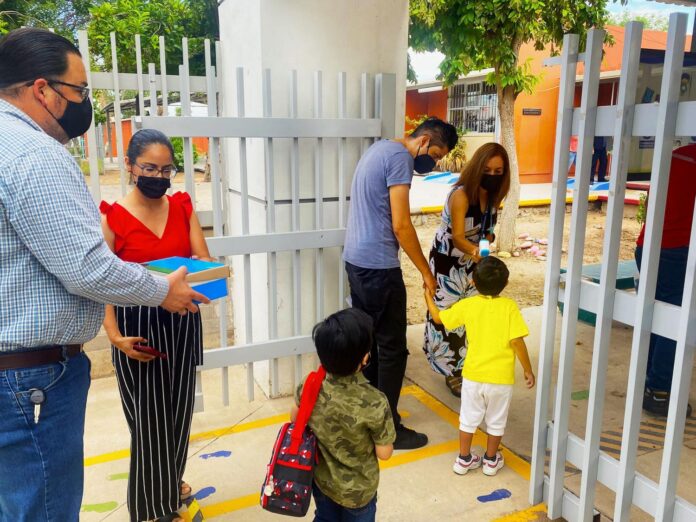 Half a dozen parents line up outside a preschool in Hermosillo on a recent Monday morning, holding hands with anxious 3- and 4-year-olds.

As they walk through the gates one-by-one, teachers take their temperatures, squirt hand sanitizer onto their outstretched palms and warmly welcome the incoming students, their eyes peeking out over face masks as they tote seemingly gigantic lunchboxes and backpacks to their new classrooms.

It’s the long-awaited first day of school. And millions of children across Mexico are stepping back into the classroom for the first time in nearly 18 months.

“It’s a very important day,” President Andrés Manuel López Obrador said during his daily press conference, cheering the reopening as a boon to students who’ve spent the last year and a half learning through lessons broadcast on TV, radio and the internet.

There’s been controversy over sending children back to in-person classes as Mexico faces high levels of coronavirus spread during the third wave of the pandemic here.

But López Obrador  has insisted that restarting school is essential, saying “Health is important, but education is also very important.”

And he’s been supported by both federal health and education authorities and international organizations like UNICEF. They say returning to classrooms is not just about improved learning, but also the physical and mental wellbeing of children.Gobierno de MexicoMexico’s President Andrés Manuel López Obrador praises schools for reopening during his press conference on Aug. 30, 2021.

Authorities estimate that 5.2 million students stopped attending school last year during distance learning, and report that incidents of domestic violence, homicide and suicide among youth and teen pregnancies have all gone up.

So last week, about 11 million students in Mexico, or 44%, returned to school, wearing face masks and sitting at socially-distanced desks in classrooms with windows thrown wide open.

In neighboring Sonora, though, the vast majority of students remained at home.

“Right now he’s the only kid, the only kid in his classroom,” said Jesus Quintana, dropping his 4-year-old son Ethan off for his first-ever day of school.

Across the state, less than 37,000 basic education students, about 7%, returned to in-person public and private preschool, primary and secondary classes.

That made Quintana feel safer about sending his son.

He said sending his son to school is stressful. But he’s comforted by the schools’ strict safety protocols, from directional arrows pasted on the sidewalk to keep students at a safe distance, to daily temperature checks and mandatory face masks.

Nearby, Norma Verdugo said with only four kids in her daughter’s classroom, she also feels like the risk is low. And she wants 3-year-old Tiana to have real school experience.

“To me, honestly, virtual isn’t the same. It just isn’t,” she said.SEC SonoraStudents in sixth year of primary school in Hermosillo, Sonora, attend their first day back to in-person classes on Aug. 30, 2021.

Verdugo has struggled with virtual university classes and said she can’t imagine little kids learning on the computer or TV.

But not everyone is comfortable sending kids back to school just yet.

Even many of those with children at the preschool, say they aren’t sending their older kids back.

“My son in the sixth year of primary school isn’t going back to school today because there are no facilities,” said Joaquin Jaime, who was dropping off his 3-year-old Samantha.

He said the school was vandalized during the pandemic and that needed repairs haven’t been made.

“The wiring, the pipes, the air conditioning, the computer lab, none of it has been fixed,” he said. “It’s the same with my oldest daughter. Her secondary school isn’t open yet either.”

In fact, more than half of Sonora’s nearly 4,000 schools didn’t reopen last week, and even among those that were open, only about 18% of enrolled students were in attendance on the first day of school.

Kendal Blust/KJZZKarla Favela walks along the street outside her primary school on Aug. 30, 2021, after finding out that it has not yet opened.

Just around the corner, a primary school sits closed, teachers sitting alone in the shady courtyard and the usual bustle of excited first-day students replaced only by the whir of cars speeding past on the road outside.

This school couldn’t open, one teacher said, because the bathrooms and air conditioning aren’t working and resources to prevent the spread of coronavirus never arrived. She said the only help they had were parents who volunteered their time to clean out the grasses and weeds that had grown unchecked for more than a year.

Nearby, fifth-grader Karla Favela peers in through the closed school gates. She didn’t find out until this morning that she wouldn’t be able to go back to the classroom.

“My teacher said we were having classes, then today she sent us a message saying we had to stay online,” she said.

“The schools were very broken down because they have been left alone,” he said. “They weren’t taken care of at all.”

But even if Karla’s school were open, Cordova says she’s worried about sending kids back while COVID-19 cases are so high.

“It’s dangerous. It’s really dangerous,” she said. “I worry about all the students and the teachers.”

Mexico recorded more COVD-19 cases in August than during any other month of the pandemic. And while 65% of adults have received at least one dose of a vaccine, children under 18 are not yet eligible for the shot.

Still, after 18 months of online classes with spotty internet and a teacher whose computer barely worked, Karla is disappointed.

“I wanted to see the classroom, what the playground is like. I wanted to meet my teachers, meet my classmates,” she said.

Instead, she’ll be among the majority of Sonoran students continuing their classes at home. At least for now.

Ford temporarily suspends production at its plant in Sonora… again

Good news for Canadians wanting to drive to Mexico

Ford to suspend production at Hermosillo plant on material shortage