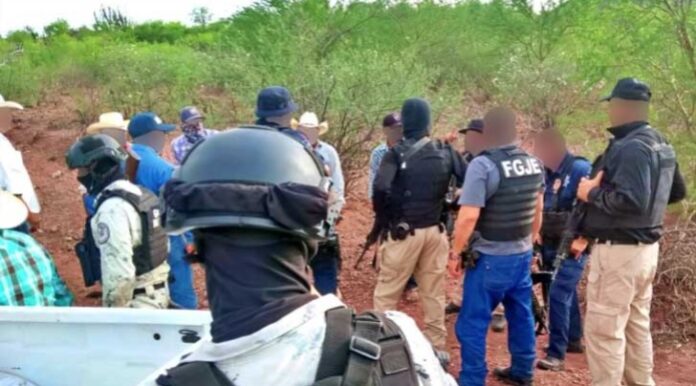 BÁCUM, SONORA .- Police corporations that make up the Coordination Table for Peace and Security of the State of Sonora, of the three orders of government, carry out search operations to locate ten Yaquis members of the Yoemia Troop of Loma de Bácum, Sonora.

For a week, members of the Yaqui ethnic group denounced that after the recent incursions by the Army into indigenous territory, 15 members of the Yoemia troop are missing.

The ten official reports of missing persons are dated Wednesday, July 14; five belong to the El Coyote ranch and three to the Agua Caliente ranch. Last Wednesday, Benjamín’s relatives denounced his loss and/or disappearance, which is why an investigation folder was opened, to which nine other complaints were integrated for the same reason.

They are Martín, Braulio, Fabián, Leocadio, Juan Justino, Fabián, Heladio, Artemio and Gustavo, all members of the Yoemia Troop of the original Yaqui people of the Loma de Bácum, for which the search operations began.

The members of the Coordination Table for Peace and Security are participating in the operations, with the consent and assistance of the Yaqui Traditional Guard, to enter the territory of the ethnic group. According to information from Yaqui activists, the initial report was of 15 missing persons on the eve of the festivities of the Santa Patrona of the town.

They did not disappear altogether. Some members of the Yoemia Troop were seen for the last time when they made patrols and others while they organized the Virgen del Carmen festivities, according to activists.

The celebrations were held on July 15 and 16; on the previous days, some Yaquis had moved to ranches for cattle and had not heard from them again. After the Army’s incursion into the indigenous territory was denounced, during the night of Friday, July 9, the Yoemia troop from Loma de Bácum – one of the eight Yaqui communities – declared itself on alert.

Guadalupe Flores Maldonado, the legal advisor to the indigenous Traditional Guard of this town, warned that since that night intimidation acts against the ethnic group have been registered. Even that the Army tried to disarm the tribe, but they did not allow it.

In the public complaint, he stated that in the unauthorized military incursion some elements were evicted by the Traditional Guard, but others remained above, in the mountains, on the El Bacate hill and would be evicted by force if necessary.

Days later, it was unofficially reported that 15 members of the Yoemia troop were missing and only one of them had been reported to the Sonora Prosecutor’s Office; now, there are 10 missing person reports.