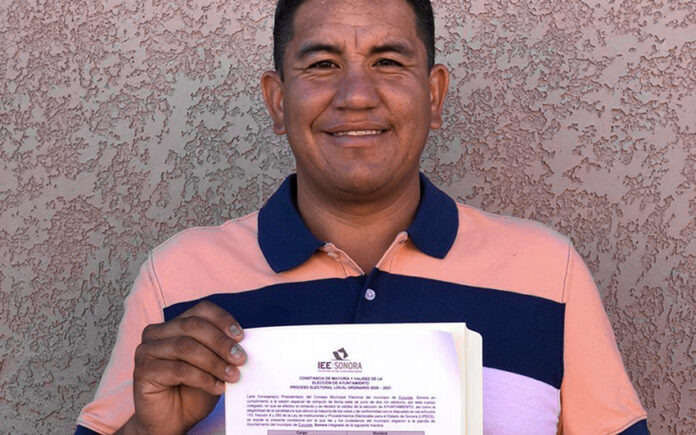 No party wanted him as a candidate, so Édgar Palomino chose to knock on doors, hand out slips with his name and ask voters to write it on the blank space on the ballot. He obtained more votes than any registered candidate and won the mayor of Curcupe

CUCURPE, Sonora- He knocked on the doors of some parties, others looked for him, but none wanted him as a mayoral candidate, in fact, some of them deceived him, said yes and at the very moment they took him down. Edgar Palomino, 34, had already resigned himself to waiting for the next electoral process, but his father-in-law had a brilliant idea. And the people encouraged him.

In early April, the State Electoral and Citizen Participation Institute (IEEPyC) closed the deadline to register candidates for municipal presidents in Sonora. It was a matter of days for Cucurpe to find out that Édgar would not be on the ballot, some began to ask, to express their disagreement, and above all to encourage him to look for an alternative.

There were 19 days until the June 6 election, and so, agitated, he arrived at the house of his father-in-law, a 58-year-old rancher from Sonora, who was on the porch drinking coffee. Edgar sat with him.

“It couldn’t be done anymore,” Edgar told him, very sad.

His father-in-law listened to him, calm, and between sips of coffee, he gave him the solution:

– “Hey then, there is a blank box there, right?

In 14 days he managed to cover half of Cucurpe. He knocked on the doors of 170 houses, they received him in all.

His wife Karina typed 150 pages of his name and then cut them out. In each house, he left a piece of paper with his full name: Édgar Aarón Palomino Ayón.

Directo explained their situation to them and asked them to write their name as is in the blank box of the ballot for the election of municipalities.

—I brought among my papers a sample of the ballot, from previous processes and emphasized the blank box, and handed out small pieces of paper with my full name.

—They asked me if it was legal, I said yes, I took advice. And they trusted me.

“He would leave at dawn, alone, with the papers and a bottle of water,” explains Karina.

“Yes, I respected the afternoon nap,” he clarified.

At 36 degrees centigrade. House to house. Some neighbors invited him for coffee, water, he lived with them and talked about the needs of the town and even about his favorite sport, baseball. Because he is a lawyer and an athlete. And he has charisma.

“You win over people quickly, everyone talks, everyone says hello,” says his wife.

—It’s a bread of God, very helpful, that’s why people may have supported it, it seemed difficult to me.

She encouraged him, but let him go alone to ask for the vote because just eight months ago they debuted as parents to a pair of twins.

“You can, you lose nothing,” he said.

And his parents also supported him:

“If you want to throw the package, go ahead, we support you,” they told him.

In the town, there are about 300 with about a thousand inhabitants, located 136 kilometers north of the capital, Hermosillo.

Édgar began his career as a public servant in 2009, entered as a proprietary councilor on a PAN list. He was never a militant, but with that party, he held various positions between 2009 and 2021, he was municipal secretary and comptroller.

With 12 years of public service, he asked the PAN for the opportunity to be the candidate for mayor. They said no.

—They didn’t give me support, so people from Morena approach, they offer me to be their candidate, I accepted, I register on the national platform.

“And when the party publishes the list of its candidates, I didn’t show up!”

He approached the PT and had no response. The PRI approached him, but because of gender, they chose a woman. And the PES said yes, but removed it from the list.

“And we ran out of registration,” he explains. “You think you need a party.”

What was an idea on the air, from his father-in-law, had an echo in the town.

The city council election in Cucurpe had 662 votes. And of those, 322 citizens put Edgar’s full name in the blank box. Another 7 put it too, but on the ballot of federal deputy.