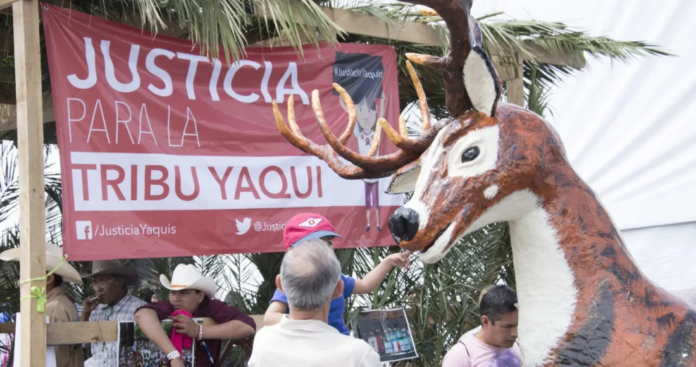 The president indicated that he will return to Sonora on August 21, so he hopes that the delivery of the land will be on that date.

President Andrés Manuel López Obrador announced the restitution of 30,000 hectares to the Yaqui peoples within the next three months.

During a visit to the community of Loma de Guamúchil in Cajeme, this Saturday, where he met with members of the eight Yaqui peoples, he assured that he will continue with his commitment to do justice to these ethnic groups, for which he authorized the head of the Secretariat of Territorial and Urban Development (Sedatu), Román Meyer Falcón, the payment of the 30 thousand hectares “as soon as possible”.

“They only gave the people crumbs and that when they needed the votes, the pantries, the beans with weevils to obtain the votes, obtain the positions and continue stealing. That is over, although there are still powders of that mud; but we are persevering and we are going to continue cleaning the country of corruption, purifying public life”, he said.

In the presence of the Undersecretary of Finance, Juan Pablo de Botton, the president assured that the official will transfer funds to Sedatu so that when he returns to the area, on August 21, the land will be handed over.

“Let’s move on. We are committed to doing justice to the Yaqui peoples, it is the least we can do in the face of the suffering suffered by their ancestors due to the mistreatment of authoritarian governments, not forgetting that communities, of Yaqui peoples, were exterminated,” he said.

In addition, he promised to start the expansion works of the irrigation district, for which the National Water Commission (Conagua) will have 1,700 million pesos.

“The land issue, we are left, is to make an appraisal and pay, but in the case of the aqueduct and the irrigation system, the canals have to be built, the water intake, the pumping, and they are more than 100 kilometers and we have to finish in December of next year”, he explained.

During his speech, the head of Sedatu, Román Meyer, explained that in September 2021, 2,943 hectares of national land were handed over to the Yaqui peoples, in addition to the reversal of the expropriation of seven hectares from the National Ejidal Development Fund Trust ( Fifonafe) and are in the process of returning another 300 hectares in June.