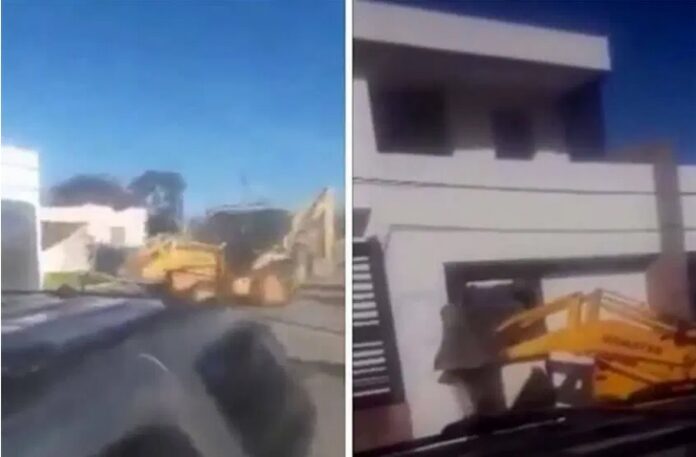 “Los Chapitos” have been blamed for destroying two homes of rival cartel leaders in Sonora.

The brothers, known as Los Chapitos, are accused of sending members of Los Cazadores (“The Hunters”) cartel with a backhoe to wreck the homes in Pitiquito, Sonora. There was no response from authorities, despite the homes’ vicinity to a National Guard base.

Parts of the two homes, allegedly belonging to leaders of the rival Caborca Cartel, were demolished in broad daylight, but the state Attorney General’s Office said it received no reports about the events, which were filmed by cartel members.

Authorities knew that the homes were a target after they were sprayed with bullets in a previous incident.

“There’s your house, Yuyo… you’re not going to have a house anymore, fool!” a person can be heard saying off-camera, presumably addressing one of the Caborca Cartel’s leaders.

The cartel members can be heard celebrating as the backhoe smashes through parts of the building.

In December, the U.S. State Department announced rewards of up to $5 million each for information leading to the arrest and/or conviction of Los Chapitos. The State Department said the four men are high-ranking members of the Sinaloa Cartel and subject to federal indictments in the U.S. for their involvement in the illicit drug trade.

It’s not only El Chapo’s sons that are involved in the drug trade: his wife, Emma Coronel Aispuro, was handed a three-year jail sentence in November in a United States court after she requested leniency from the judge.

In October 2019, the armed forces undertook an operation to capture Ovidio Guzmán. Culiacán, Sinaloa, was briefly turned into a battlefield with blocked avenues, burning vehicles, convoys of armed vehicles, and heavily armed men. Amid the threat of civilian turmoil, Ovidio was released.

Two of the leaders of Los Cazadores were arrested in April and June last year.

The Sinaloa Cartel and other cartels have shifted their concentration from naturally grown drugs such as marijuana and opium to the manufacture and distribution of more powerful synthetic drugs. Defense Minister Luis Cresencio Sandoval said in March that 127 synthetic drug labs had been busted by the current administration, mostly in Sinaloa.

They were going to war! They arrest five Sinaloans with weapons and explosives in Sonora