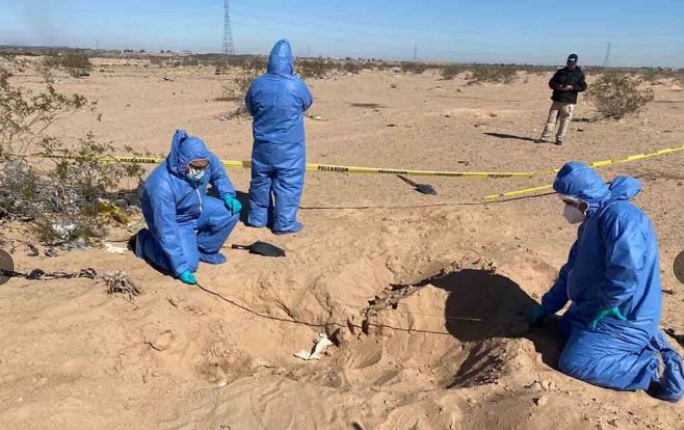 Authorities in the northern Mexican state of Sonora say volunteer searchers have found 11 bodies in clandestine burial pits just a few miles from the U.S. border.

Sonora has been locked in a bloody three-way turf battle between rival factions of the Sinaloa cartel and gangs allied with fugitive drug lord Rafael Caro Quintero.

On Tuesday, those gangs left three bodies — one hanging from a highway overpass — in three different cities in Sonora. The bodies were left near banners accusing authorities of protecting one of the Sinaloa factions.

In the case of the clandestine graves, investigators used backhoes Sunday and Monday to excavate a series of pits, many holding several bodies, in San Luis Rio Colorado, across the border from Yuma, Arizona.

The state prosecutors’ office said the bodies were “badly decomposed” and would be subject to genetic and specialized forensics tests to identify them.

Volunteer search teams made up of relatives of disappeared people led authorities to the pits in a stretch of desert near a garbage dump.

Relatives of the disappeared have to conduct their own searches in many parts of Mexico because police are unable or unwilling to do so.

Mexico has more than 98,356 disappeared, according to government data. Most are thought to have been killed by drug cartels, their bodies dumped into shallow graves, burned, or dissolved in acid.

The government has struggled to identify even the bodies that have been found. Some 52,000 await identification.