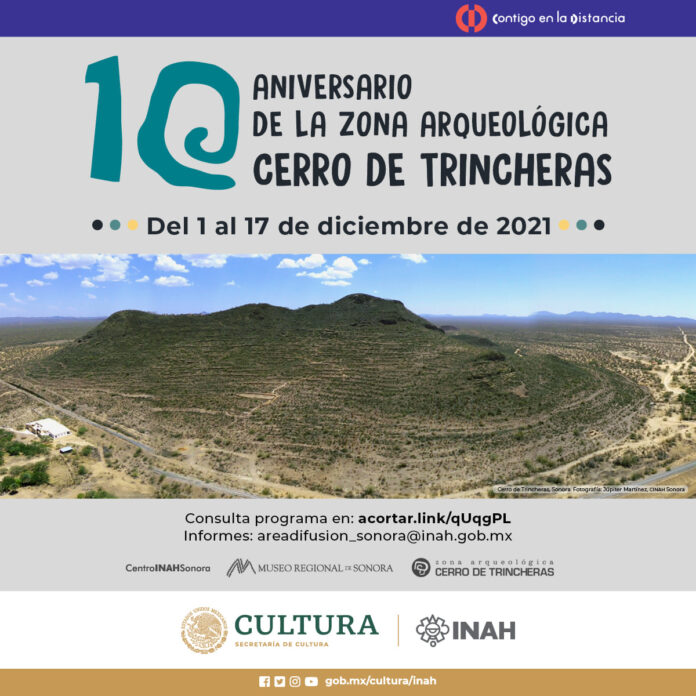 From 1 to 17 December at the #ZonaArqueológicaCerrodeTrincheras
Ten years since its opening, its outreach and community engagement, but more than 30 years of  #research.

Cerro de Trincheras is the most impressive site in Sonora, from the point of view of its monumentality. It was a cultural area of ​​Oasisamérica, which included part of the southwestern United States and northern Mexico, it was inhabited, like Mesoamerica, by sedentary agricultural groups that came to possess complex cultural manifestations.

It is characterized by being a modified hill with more than 900 terraces, with dimensions ranging from 10 to 15 meters, but which can reach 150 meters in length. The walls of the terraces and of the different constructions lack mortar or cement, that is, the rocks are placed one on top of the other making exclusive use of gravity, and can be up to three meters high.

The Cerro de Trincheras has three outstanding structures, the first is located near the base of the hill, it is La Cancha. This space is a communal area. The second structure El Mirador, which with archaeological evidence has been able to determine that this area was occupied by an elite group, since they found special ornaments of unusual use.

The third and most outstanding is the Plaza del Caracol, it is located at the top of the hill, where there is a spiral structure, which, seen from above, resembles the spiral of a cut snail. This area was of restricted and ritual use.

The trenches culture developed between 200 to 1450 AD. But Cerro de Trincheras reached its greatest prominence around 1300 AD. C.

From the City of Hermosillo, capital of the state of Sonora, take Federal Highway No. 15 to the north, towards Nogales. In the town of Santa Ana, take the deviation to the west towards Caborca ​​on Highway 2; Until the booth that is located at kilometer 40 (Santa Ana-Caborca), after 3.5 kilometers, the town of Trincheras is located 22 kilometers from this deviation. In Trincheras, continue along the entrance street (Boulevard Joaquín Murrieta), in a straight line to the site where the Visitor Center of the archaeological zone is located, whose address is Boulevard Joaquín Murrieta and Calle Sonora.

Services available in the

Introductory Tour area, where the visitor will have an approach to the development of the culture of the first settlers of the region, up to the Trincheras Archaeological Tradition, their way of life, cultural development, in addition to the relationship with populations and culture Casas Grandes or the Central Coast. How much with a temporary exhibition room. Tour with the archaeological site through a path with points of interest, rest areas. Guide to groups, by appointment. Children’s workshops with different activities where care for cultural heritage is instilled and promoted. All services are free including the entrance to the archaeological zone.

Attend with a hat or cap, sunscreen, and comfortable shoes and clothing. Bring water. Distance of the route is approximately 2 kilometers (round trip).

The wealth of the Cerro de Trincheras Archaeological Zone, Sonora, is exhibited in Tucson

The exhibition A Tour through the History of Trincheras was inaugurated at the Consulate of Mexico in Tucson, Arizona 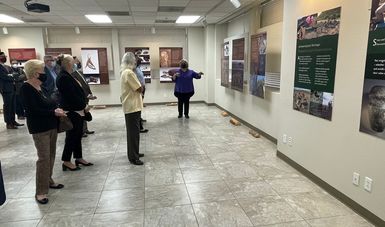 Tucson, Az.- Under a collaborative framework for the dissemination of the cultural heritage of Mexico in the United States, and on the tenth anniversary of the opening of the Cerro de Trincheras Archaeological Zone, located in Sonora, the representation of the National Institute of Anthropology and History (INAH) in Sonora, in coordination with the Consulate of Mexico in this American city, inaugurated the exhibition A Tour through the History of Trincheras

The exhibition is presented at the Leonora Carrington Gallery of the Mexican consulate. The opening ceremony was presided over by the Mexican consul in Tucson, Rafael Barceló Durazo, and by the director of the INAH Sonora Center, José Luis Perea González; It also had the participation of a researcher from this state representation of the institute, Elisa Villalpando Canchola, who presented the academic research trajectory, as well as the intervention of the different cultural and social instances that have participated in the archaeological zone, with a guided tour by the sample.

The exhibition is composed of 22 didactic images, which are part of the dissemination strategies produced by the INAH Institutional Project Trincheras, exhibiting a quick and illustrated journey through the archaeological history of the Sonoran territory, which includes the high social value and scientific of the existing sites and vestiges, as well as the social responsibility that is had to protect, conserve and spread the irreplaceable cultural heritage of Mexico.

In the exhibition you can appreciate the long history of human occupation of the Sonoran desert, narrated from the archaeological perspective and the evidence of the first groups of Clovis hunters, the emergence of permanent villages of corn farmers, the diversification in the occupation of the territory by the ceramic communities integrated within the Trincheras Tradition, and the emergence of the governing center that is now known as Cerro de Trincheras.

The geographical area of ​​the Trincheras Tradition is one of the richest regions in natural, cultural and archaeological heritage, it represents a fundamental axis for the understanding of the pre-Hispanic past and the conformation of the cultural roots of the Sonoran people.

Arizona and Sonora not only share a border with a vast prehistoric, pre-Hispanic and historical heritage, but also a heritage heritage and with it a responsibility to preserve it, so this exhibition endorses, within a framework of collaboration, the commitment to continue promoting the conservation and dissemination of the cultural heritage of Mexico and the United States.

CEDO’s “School of the Sea” sets high expectations for 2022