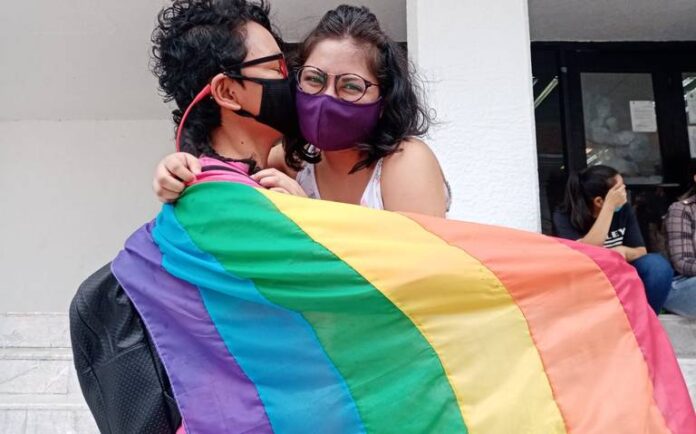 This Thursday the initiative presented by the deputies Rosa Elena Trujillo, from Movimiento Ciudadano, and Celeste Taddei, from Morena, was approved.

By majority vote, the Sonora Congress approved the Equal Marriage Law, which modifies articles of the Family Code, making possible the marriage union between people of the same sex.

This Thursday the initiative presented by the deputies Rosa Elena Trujillo, from Movimiento Ciudadano, and Celeste Taddei, from Morena, was approved before the Plenary of Congress the initiative for equal marriage in Sonora with the characteristic of urgent and obvious resolution.

“Human rights are not up for consultation. Failure to recognize the figure of equal marriage, as stated by the Supreme Court of Justice of the Nation (SCJN), has led this Congress and this state to fall into serious and serious omissions that threaten the quality of life of many people.

“From the privilege of heterosexuality we have married, we have created a marriage, we have generated a series of social security benefits for the families that we have formed with our families,” said Trujillo.

However, the deputies of the National Action Party (PAN) and Institutional Revolutionary Party (PRI) bench demonstrated against the process in which the initiative is put to a vote, as they assured that it is necessary to go through commissions to carry out their approval.

Alejandra López Noriega, PAN deputy, intervened during the session to point out that the initiative has not been properly publicized, so it is necessary to take into account the figure of the Open Parliament.

With 25 votes and eight against, the urgent and obvious resolution of the initiative was approved, however, the initiative was approved by a majority of votes in the local Congress, for which various provisions of the Family Code are amended, as well as the repeal of article 102, which directly establishes that “marriage contracted between subjects of the same sex is legally impossible.”

In 2015, the SCJN established that all state civil codes in which marriage is exclusively understood as the union between a man and a woman are unconstitutional since there is no constitutional reason not to recognize it.

In addition, the prohibition of marriage between people of the same sex is also considered discrimination by different entities and Human Rights organizations, for which on different occasions they have indicated that it is necessary for countries and states to reform their laws to reverse or change discriminatory situations in their societies.