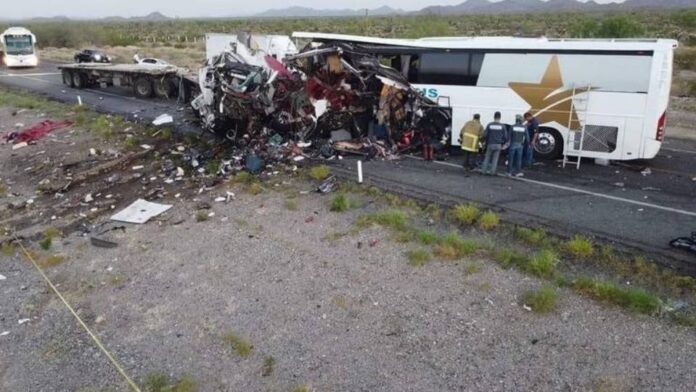 Plutarco Elías Calles, Sonora . An accident between a passenger truck and two trailers on the Sonoyta-San Luis Río Colorado highway, northwest of Sonora, left 16 people dead and 22 injured on Thursday, six of them very serious, reported the Attorney General’s Office in the entity.

In the events, they were registered at approximately 5:00 am this Thursday on the state road in the neighboring state of Sonora, around 22 injured are reported

The commercial bus “Expreso Interbus” hit a trailer parked on the side of the asphalt strip.

The bus was later hit head-on by another tractor-trailer that was traveling in the opposite lane, according to the reports.

The accident was reported at dawn this Thursday on kilometer 37 of the highway that leads from San Luis Río Colorado-Sonoyta .

According to information from the local media El Sol de Sinaloa, there are at least three units that participated in the accident: a passenger bus that left the city of Culiacán and headed to the border city of Tijuana, and the other units are two cargo trucks.

The first reports indicate that the passenger truck collided with a cargo truck that was parked on the state road lost control and went out of its lane to later hit head-on with another heavy unit.

The neighboring state authorities, through the Ministry of Health, announced that 22 people were injured during the accident, six of them are in serious condition.

The head of the agency, Enrique Clausen Iberri, reported through his Twitter account that “the fire emergency bodies, the Sonoyta Red Cross-SLRC and the Ministry of Health, are working very early on an unfortunate SLRC-Sonoyta road accident, km 37 ”.